enjoying the beautiful mess that is life

Not with this guy… 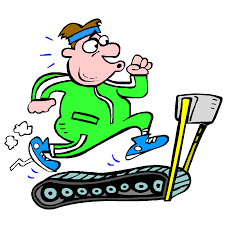 When I wrote an earlier post about running a 5k this Fall/Winter, I had no idea what I had gotten myself into. Tonight I started training for my 5k and I hope I can make it!!

The honeymoon of the idea of running a 5k is over and the reality of how difficult this will be has hit. I’m committed to giving it a 100% and don’t give up easily.

So I’ll admit it doesn’t quite have the same ring as Jenny cheering Forrest on, but this is what I envision onlookers yelling and cheering me on as I cross the finish line!

Let me preface things by saying,  I hate running, not that I can really say I’ve tried to like it. I confess I don’t understand people who enjoy running and get a “runner’s high” AT ALL! I like the elliptical, playing tennis, a few other things, but running and/or the treadmill has never been a friend.  I agree with my sister when she said, “I only want to run if something’s chasing me.”

So keeping all that in mind, I had a crazy idea Sunday night to  run a 5k. I need something that would give me  a long-term goal to work towards and help keep me accountable and on track, because for some reason losing 50 more pounds isn’t motivation enough. : ) (These last 50 seem harder than the first 50 pounds were to lose).

Late Sunday night and a couple of text messages later, I finally decided that I’m going run (probably more like jog) a 5k late this Fall with my sister.

So there it is… in writing… I am running a 5k this fall with my sister.

I am going to start training/prepping next week. There’s an awesome website to help you get from couch potato to 5k in 8 weeks or so and this is my game plan.

We’re looking to run the 5k either in Charlotte or South Georgia in November/December. If only Scranton wasn’t so far away, I would run in the “Michael Scott’s Dunder Mifflin Scranton Meredith Palmer Memorial Celebrity Rabies Awareness Pro-Am Fun Run Race For the Cure.”  Hmmm… I’m sure there’s another worthy cause out there.